Now how many of you have seen this? 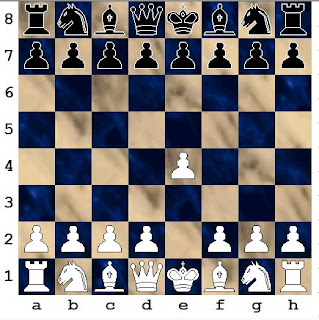 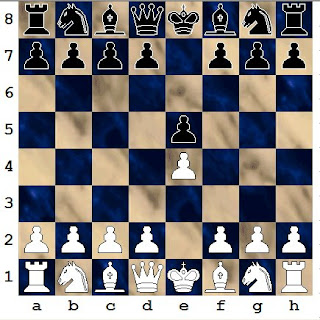 Everything is fine so far...
THIS IS A GOOD AGGRESSIVE POSTING FOR THE BISHOP
Everything is still good... so far. 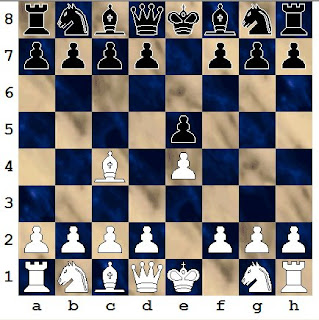 Whenever someone plays this move the second player should have an alarm bell going off somewhere... the Bishop is staring at a big weak square for Black, the f7 square. Something that needs to be protected.
1. e4 e5 2. Bc4 Nc6
SITUATION NORMAL... 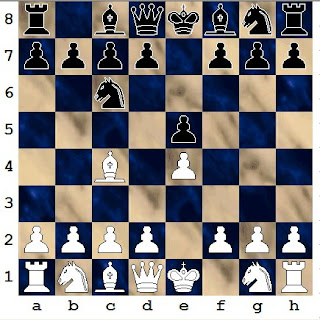 Black has played the best move in the position... his Knight comes out to help defend the e5 square. This position occurs hundreds of thousands of times a day... if not more! This tabia is quite popular. A "tabia" is a common opening position that many, many players agree to play and that the game usually does not really start until the "agreed" upon position arises during actual play.
*RED ALERT! *RED ALERT!
3. Qh5? 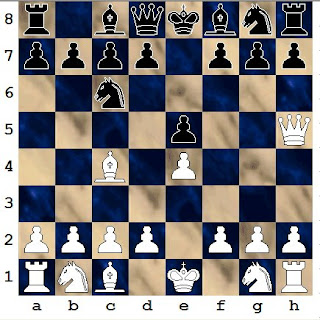 3. Qh5? Fishing for trouble?
-
3. Qh5 should be an easily repulsed attack. The threat is to simply take advantage of two weak diagonals that lead to the weak f7 square. With correct defense this move 3. Qh5 is rubbish... it just wastes too much time and allows the second player to equalize and or to take over the initiative.
-
This move is seen at all ASCF events by about round 3 and is pulled out by youngsters looking to register either an easy win or their first point. In any event knowing how to play this trap is a stage that all players go through... but this should not be the weapon of choice during a chess tournament. Save it for friends and family!
* * *
HOW NOT TO DEFEND AGAINST THE THREAT
or
3. ...Nf6 to "attack" the queen and lose the King. 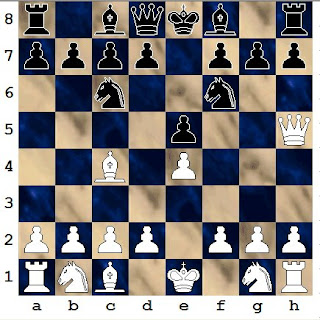 -
1. e4 e5 2. Bc4 Nc6 3. Qh5? Nf6??
-
If you take two people give them a chess board and a set of chessmen and then lock them into a room eventually one of them will figure this checkmate out. It is a natural progression... most players make a pit stop here during their journey learning chess. To know this trap allows you to defend against it... which is very important for all ASCF players!
-
SCHOLAR'S MATE ANYONE?
- 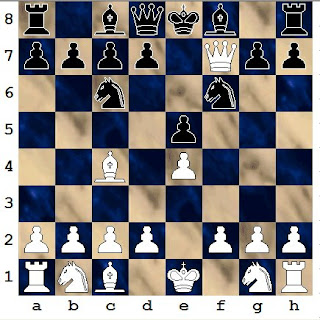 THE MORE STUDIOUS OF THE TWO PLAYERS LEARNS THIS "TRAP" FIRST...
-
Only to realize that this trap is really a waste of time after 3. g6, 3. Qf6 etc... But to learn this and to use this trap is a pit stop that 99% of all ASCF players seem to make. A necessary part of the learning process... to learn about weak diagonals this "trap" is a useful tool for all Chess coaches. Of course it is an even better example of how to teach defense against uncoordinated attackers!
THE WEAK DIAGONALS 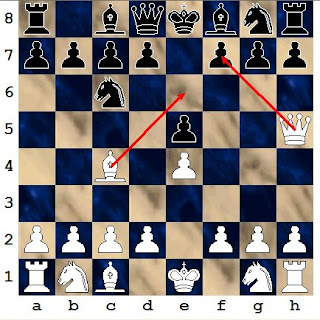 FOOLS MATE and the SCHOLARS MATE both require the use of weak undefended diagonals. A good place to start teaching defence in chess to youngsters! -Coach Sean.