WORSE FATES THAN PLAYING & ENJOYING A GOOD GAME OF CHESS... 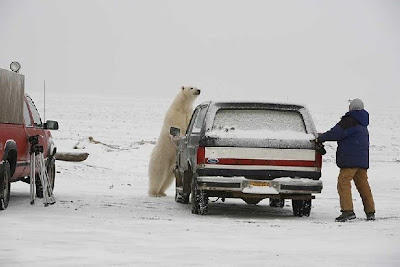 NOT MY IDEA OF FUN.

I don't know about you, but I am going to stick with playing chess... playing ring around the Ford with a Polar Bear is not my idea of fun. I hope he didn't lock his keys in the truck... and why is his friend only taking pictures instead of helping him? Also... what happened to the friend once he got into the truck? Hmm...
Posted by Coach.SEAN at 10:19 AM 1 comment:

CHESS SIMUL FUN - Part of being a good chess coach!

As a Scholastic Chess Coach I have to travel from school to school giving chess simultaneous displays - and with the following constraints:

1.) It has to be exciting! This one is one that I am always trying to work on - the next one always has to top the previous simul given.
2.) I have to checkmate the scholastic players and those youngsters who are interested in chess as quickly as possible. Each youngster may only have anywhere from five to fifteen minutes worth of time with which to play his or her game against me.
3.) If I lose a game I lose a set. So if I want to keep my chess boards and sets I had better win every game! That is quite a bit of motivation for me as I cannot be going to chess clubs without my precious chess sets.
4.) I am a guest of the School that is hosting the event and as such I observe their rules - as any respectful guest would.

Enjoy these pictures from the 15 board chess simultaneous exhibition that I gave today – please notice that no chess clocks were in use during this event! However each player had very little time – maybe ten minutes or fifteen minutes maximum so I had to checkmate them as quickly as possible - as stated above! This event was a lot of fun – the largest Simul I have given so far this year with my own personal best being over twenty chess boards. This event had me worried that I might lose a set or two as this is my largest and strongest chess club and a lot of my players were eager to joust with me and win one of my prized chess sets!!

As it is at the chess board so it is in the great adventure that is called life! - Coach Sean.

Before the storm breaks…

Attack of the Scholastic players - the wave comes crashing down!

The battle rages on!

As soon as I defeat a youngster - 10 more want to take his/her place - and that was when it was slow!

I played a lot of kids today!

"At the end of the game, the king and the pawn go into the same box".

Even though I do not use boxes for the pieces - I certainly had a lot of them to put away!

Make it a great day. - Coach Sean Tobin.
Posted by Coach.SEAN at 8:09 PM No comments:

For those of you not in the know Dionisio Aldama is the second highest rated player in Arizona – as of this writing. He is probably as strong as most Grandmasters are – minus the G and the M in front of his name. During the final round of the most recent edition of the weekly Friday night action chess tournament Dionisio took the measure of his opponents and then firmly seized them up by their chess minds and then violently twisted the chess life out of them! The Friday night action is held at the Chess Emporium every week and is at least four rounds long. It was this humble chess blogger’s honor to bear witness to an extremely exciting game as it was in progress during the fourth round of the most recent outing – and then to also have seen another fine work of art produced by this extremely strong player from earlier in the night – one Dionisio Aldama.

As an added bonus for the evenings celebration of chess I got to watch Dionisio analyze Chess Emporium Chess Coach Joe Lafornara’s most recent loss – his fourth round loss to an extremely strong expert (2150-ish). What takes work for 99.9 percent of all players in the world comes with ease for Dionisio Aldama – and usually when he spots a winning idea it is with a smile upon his face. He even smiles when playing the winning line while at the board - this is a person who truly loves chess.

If you want the “Free” lessons from Dionisio then leave your ego at home and come play him during the Friday Night Action tournament that starts at 7 PM every Friday night. Arrive early so you can register for this fine event – and seating is limited during some editions of this event as there are also Super Group and Private lessons being given - in addition to the monthly three round scholastic Swiss style Chess open. The Chess Emporium is at times like a big chess hive – with lots of activity.

If you are looking for another opportunity to play Dionisio then this Sunday – the 17th of January – he will be giving a 12 board clock Simul at the Paradise Valley Mall Borders Bookstore. The fun starts at 2PM and continues until around 8PM that evening and the entry fee is $5.00 – paid to the man with a plan – Dionisio Aldama. You will have 30 minutes to match wits with one of the nations top players – and he will have only 30 minutes to move back and forth from one board to another as he gives lessons to one and all takers. This is a benefit to help support one of our strongest players – so be there or be square on a chess board square!

To warm up for the clock Simultaneous Exhibition Chess Match this Sunday here is a tactic from one of Dionisio’s games. This one didn’t last long – he takes the heart of a 2150 rated player in 16 moves! In fact when I played over the game I had to sit there for a minute or two before it dawned on my why the player of the white pieces was resigning his game to Dionisio.

BLACK TO PLAY & WIN A PIECE!

As Sherlock Holmes might say “Elementary, my dear Dr Watson”

But as all chess players know – the devil of a combination is hidden in all of those chess board details!

Posted by Coach.SEAN at 5:52 PM No comments:

TWO PUZZLES from ROUND 6!

BLACK TO PLAY & CHECKMATE in 4 MOVES!

4 out of 5 games were decisive today - all of them exceedingly interesting battles. Landa vs Vocaturo was one amazing battle - the pawns winning the game for Landa who had a Queen versus two Bishops and a Knight. Very interesting game!

Kamsky and Almasi have set a blistering pace - 3 wins and 3 draws for both of them. With their game against each other still looming on the horizon this event is still heating up! Caruana is playing very attacking chess and so is Bologan - especially Bologan! He is burning bridges either winning games or losing games, with not one draw in this event yet. He is a danger to anyone in this event and he still has a game against Kamsky to play as well - having lost to both Caruana and Almasi.

The Italian contingent - Vocaturo, Brunello, Godena and Caruana are getting very good experience by playing in this event. I do have to point out that Caruana is now representing Italy having grown up here in the United States.
Stay tuned for more fighting chess from this extremely interesting Italian tournament.
- Coach Sean Tobin.

Posted by Coach.SEAN at 8:20 PM No comments:

DAVID HALL has a think.

A gathering of chess friends - PVCC!

Photos from the most recent meeting of the PIONEER VALLEY CHESS CLUB which meets in Northampton Massachusetts at the local Burger King on King Street every Saturday from 6 PM till CLOSE or whenever the last person leaves for the night. Tonight David and I departed at Midnight! - Coach Sean.