An interesting K-3 U600 Game from two of my really good students.

Would anyone like to go over an interesting Scholastic chess game?

Well then, here you go!

Here is the big round three game from today's Supergroup tournament.
Round 3 S09 Feb/March SG D***** vs A*** CHESS GAME : 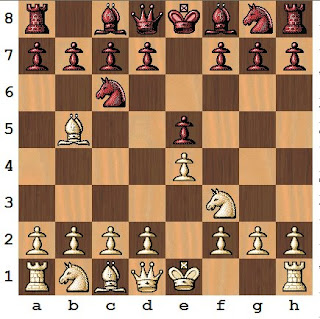 We have a perfect RUY LOPEZ opening everyone! I am impressed... this is the opening that we should all want to play.

Player 2, In the future we do not want to put the Bishop out on this b4 square when our opponent has yet to play his/her Knight to the c3-square. Player 1 gained some time by attacking your piece with his pawns... he could have built a "big center" which would have helped him a lot more than it would have helped you. 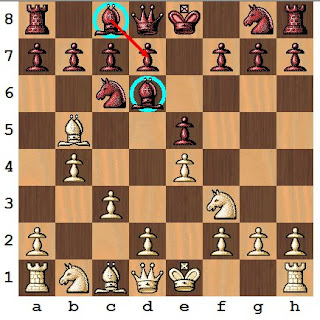 This square is not the best place for the Bishop. Let us take a look at what it is doing here.

1.) His friend, the other black Bishop, is blocked in.
2.) Kind of hard to move that d-pawn now.
3.) Your Bishop has become a big "pawn". It just looks at the pawn on e5 and cannot see very far into the distance.

Player 1, you did a very good job in chasing this Bishop. This is what you should have done and you did a good job in how you went about doing it.

Out of the opening Player 1 had stated his case a little better than Player 2. But let us not forget that there are three stages to the game of chess:

and finally the ENDGAME.


"Before the endgame the gods have placed the middlegame!" -- TARRASCH

In most scholastic chess games you have to win not one, not three but only two of three chess "arguments" usually. Most Scholastic "debates" or chess arguments are won either in the opening or in the middlegame.

When playing chess, not just in scholastic chess events, it is always good to have "fighting spirit". If you are losing play on for the cheapo. Nothing wrong with it... remember chess is a contest of wills too... E. Lasker was of this opinion. 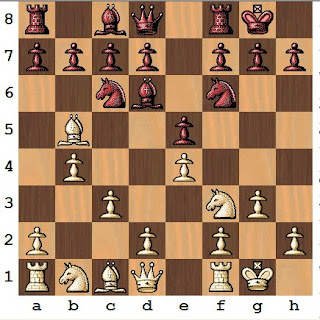 I like King safety. Player 1's move six is perfect. But then he moved Gary pawn... not the best idea! Remember that FRANK, GARY & HARRY do not want to be moved unless they really, really must be moved. Their job is to guard the King.

Player 2 now has some light squares with which to use around player 1's King. A bit drafty those white squares! I would say that this is where we start to see the argument go in favor of player 2. His King is just a bit safer now. 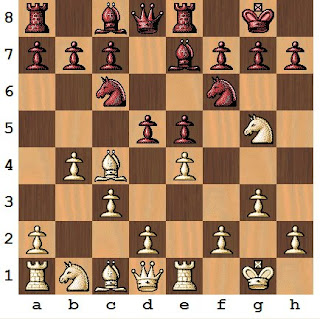 BLACK HAS GOOD DEVELOPMENT NOW!
Sorry, but we are all out of "FRIED LIVER ATTACKS" today! Black has too many pieces developed now so his 10. ...d5 move is a really good rebuttal to Player 1s statement of "I will attack your f7-square!" With the move 10. ...d5 Black says "No you shall not attack my f7-square!".

Right about here there was a bit of a touch move controversy. Player 1 had to admit that he had clicked the e4-pawn with his Bishop and so this is why he played that move. This is why we must restrain "The thinking hand"!

In the future, no "thinking hands" please! Let us all take our time... use our "SYSTEM" and find the best moves at the board. Double check them... and only then play them! 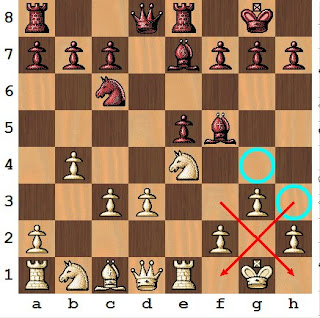 Now it is the second player who has better placed pieces. This may have been avoided... by picking some good squares for our team players to go sit on while they wait for the order to attack. That white Bishop on d2 looks kind of "pinned" now, doesn't he? 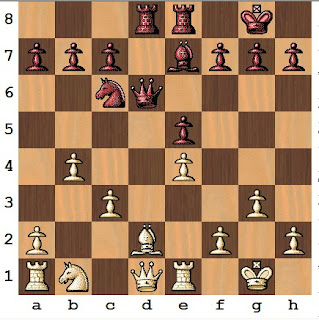 Who has the better placed pieces?
What should the first player's plan have been?
... and what plans do you like for the second player now? 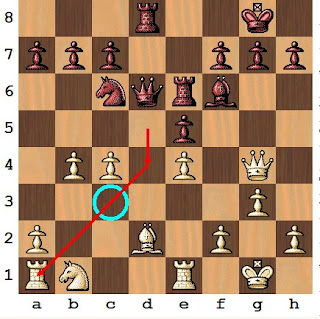 I sense an impatient move! There is a weak diagonal on the board for the first player now... can you see which diagonal it is of which I am speaking?

The only defender of the a1 to h8 diagonal went to sleep... now his friend the a1 Rook is a goner! 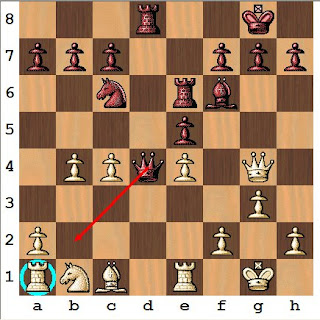 This is what I mean by "Is my team working together now?" If player 1 had developed ALL of his pieces and had his Rooks looking at each other then this would never have happened to him. That a1-Rook would be protected by his twin on the e1-square.

We now had touch move controversy number two. Here the move 21. Bc1 was played by that evil creature "THE THINKING HAND"! Do not let your hand think for you... use your brain and restrain that evil "THINKING HAND"!

Of course... the Knight on b1 cannot be seen by the Rook on e1 and so it goes lost.

This position is such a good one to show when you want to talk about the power of centralized chess pieces. 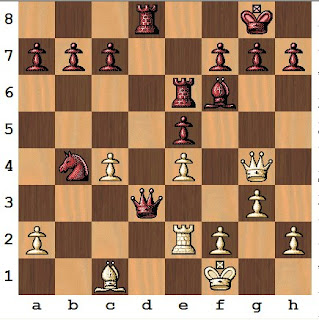 It eventually transpired that Player 1 created a back rank mate threat while Player two was hunting the White Monarch and playing power moves. He kept that King on the move with a lot of checks! Then he took some time to defend against the back rank checkmate.

In the final attack, Player 2 managed to overpower player 1's King and was about to deliver a checkmate when player 1 "flagged" which is to say lost on time.

I was really very much impressed by player 1's fighting spirit. Even when he was clearly losing the game he still managed to create some deadly threats against his opponent's King. Against a much less aware opponent he may very well have delivered checkmate to the Black Monarch via a back rank checkmate.

Player 2 impressed me with his handling of "material". I have noticed that when he goes up points he tries to control the position and to just liquidate into a won endgame. Very advanced sense of how to play actually.

However in the future even if your opponent should go below the five minutes mark you should record your game and try to find the best moves. That is if you have a lot of time as did player 2 during this game. It was he who showed very good clock management skills and that made a really big difference in the end. What I am saying here really applies to anyone who finds them self in this situation. A really good move will cause a player who is short on time to, more than likely, play a mistake. One that you, the player with more time, will be able to take advantage of.

Enjoy the game -Coach Sean.
Posted by Coach.SEAN at 10:27 PM