Here are the results from my one day chess camp held on Saturday the 22nd of August down at the Chess Emporium.

RESULTS FROM THE TOURNAMENT:

Quite an interesting event! Four way tie for first and so we had to go to the tie-breakers where Alexander Vogel came out on top. Congratulations Alex! 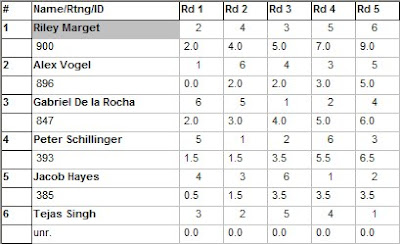 Peter Schillinger really impressed with his second place showing against such strong opposition. Having been able to watch some of the games I noticed that he had Riley in one of their individual games - he was up a piece! Later on in the final moment of the game though Peter lost the thread and ended up losing the game. He played some really exciting chess in this camp!
Riley Marget stole the show by scoring 9 points out of a possible 10! Congrats Riley! Winning this event was not easy as he had to save two lost positions with some creative tactical play. He was only prevented from going 10 for 10 by a higly motivated Gabriel de la Rocha.
XXXXXXXXXXXXXXXXXXXXXXXXXXXXXXXXXX
Thanks for tuning in! Stay well and be well - Coach Sean.